How I chose my cover.

American Family, my debut novel, is the story of two men, Richard Lawson and Michael Elson, struggling to gain custody of their biological daughter, Brady, who is in the guardianship of her mom’s parents in Oregon. Frank and Kathleen are fundamentalist Christians, as is she. Brady’s mom, Brenda, died in a drug and alcohol related car accident on her way to meet her dealer when Brady was five. For the last five years Brady has enjoyed being the center of her grandparents’ world. Frank and Kathleen Nordland see her as God’s way of relieving their grief and guilt over her mom’s death. They had handed over hunks of their retirement trying to get Brenda safe and sober. All hope died when the sheriff knocked on their door in the middle of the night telling them their daughter had died but they had a granddaughter who needed them. Now five years later, Richard Lawson calls from California and tells them he’s sober and ready to be a father. 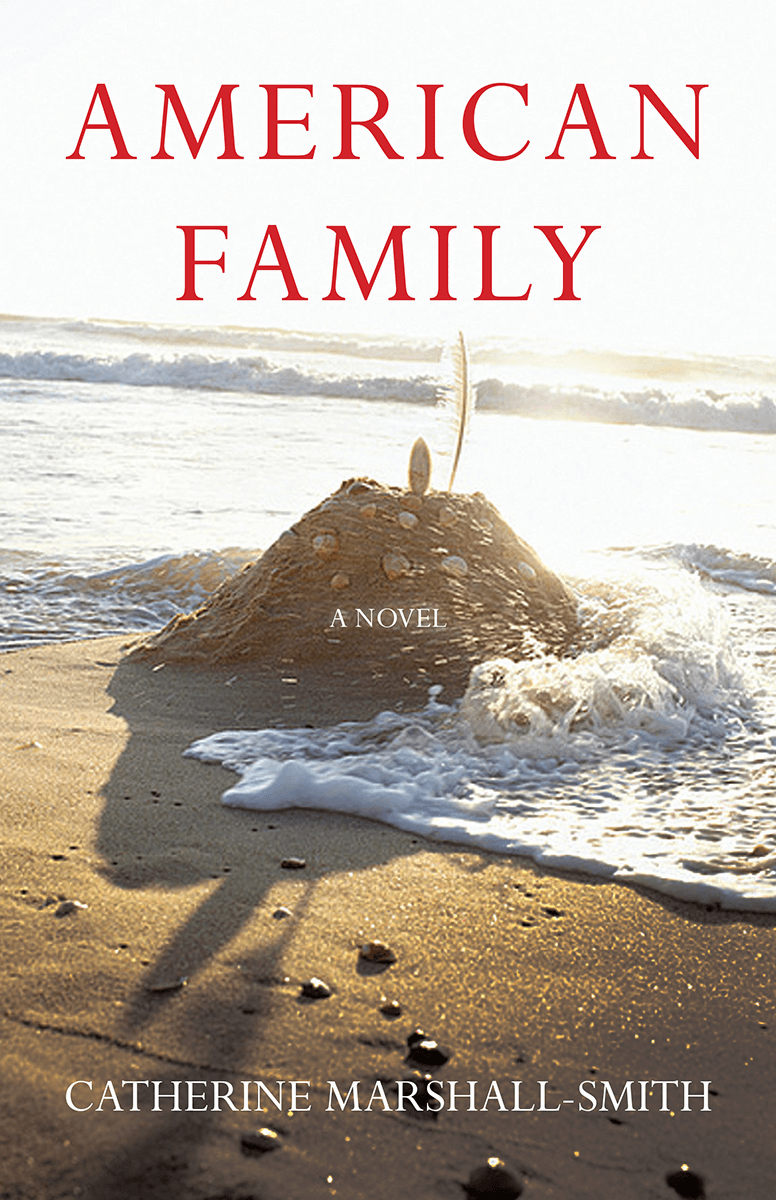 The cover shows a roughly constructed sand castle, lovingly studded by shells and topped with a feather. The sun is setting and the tide is coming in, lapping around the edges of the structure. In the book, Brady and her fathers are joined by her first real friend on Brady’s first day in California. She is a shy and awkward kid and uncertain in the company these two men. But this is her first trip to the beach and she really gets into mounding up the wet sand with the help of Fiona who happens to be there and volunteers to relay water from the surf to the site. Together, they built something out of nothing and as the sun sets, they stand back shivering in the breeze to admire their handiwork. As they watch, a wave rushes in and blurs the definition of the walls of the castle. Brady cries out and tries to protect the structure but realizes the waves will never stop and the demise is inevitable. “We’ll build another one.” Her father tells her. But she wanted this one forever.

This scene naturally emerged in the story and I realized it was a metaphor for two powerful forces this newly formed family was about to take on, the law and the church. Edna Vincent Millay wrote in “Second Fig” from A Few Figs from Thistles (1920):

Safe upon the solid rock the ugly houses stand;
Come and see my shining palace built upon the sand!

In the Holy Bible there is a similar quote:

The “Rock” is the both the church and the Judeo Christian law. Richard and Michael are gay and considered by some conservative Christians to be outside of both. Without protection under the law their family can not be protected. At the beginning of the writing of this novel, same sex marriage wasn’t legal and the Defense of Marriage Act was put in place. Openly gay priests could not be ordained and since same sex couples could not marry legally, they were not blessed in the churches.  Their family had no protection and could be swept away at the whim of a judge with the full weight of the law against them.

Since then DOMA has been struck down and many churches have become “Open and welcoming.” Gay priests and bishops have been appointed and same sex marriage is common. Still, some of the churches cannot, will not change. The protective rock of faith is denied them.

I wanted to deal with that conflict, not as a superficial plot devise, but as a genuine heart felt dilemma. The LGBT community is safe inside the doors of United Church of Christ, the Episcopal, Methodists, and Lutherans. So who cares about the rest?  There is widespread rejection of conservative Christian doctrine as irrelevant because of their rejection of same sex families. This works until you have shifts of power, such as when candidates for president of the United States start courting the evangelical vote.

I wanted to create characters who were Christian and sympathetic. Who genuinely believed homosexuality was an abomination but who also saw God as love. I refused to demonize Frank and Kathleen. After spending their retirement unsuccessfully on saving their daughter from addiction, they stepped up and took Brady in as their own to love and raise. I wanted to see them struggle with the law as well as their faith, just as much as I expected Richard and Michael to struggle to gain custody. Marginalizing people of faith as ignorant I and irrelevant is not a lasting solution for gay families. Gaining understanding, showing respect and compassion are. Otherwise all you have is a house upon the sand subject to changing winds of public opinion.

Read an Excerpt »
Go to Top